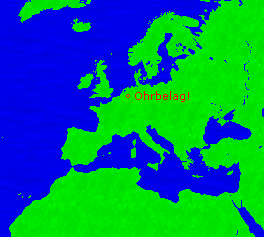 Beyond hit parades and sales figures they are still there, the individual, extraordinary, creative musical artists. Mostly ignored by media, they scrape a living known only to insiders.

Ohrbelag is a non-commercial show on the Open Channel of Radio Emscher-Lippe, and can be received on 96.1 and 98.7 MHz FM throughout the area of Gladbeck / Bottrop / Gelsenkirchen and parts of the surrounding cities.

Ohrbelag provides a platform for alternative music (with a special focus on Gothic, Wave, and Electronics, but Punk, Metal, Reggae, and even some Krautrock can also be found). Besides introducing new records, Ohrbelag pays attention to the local music scene with band features, interviews, announcements, and concert recordings.

06.07.1992
The first Ohrbelag! show goes on air.
29.09.1992
After six shows Ohrbelag! gets scheduled for regular broadcasts on the 29th of every month.
14.07.1993
Ohrbelag! expands from 1½ hours per month to two shows per month with one hour each.
25.04.1997
Radio Emscher-Lippe starts an experimental internet livestream (Xing Streamworks). For the first time Ohrbelag! can be received worldwide and takes the opportunity to launch its own site on the web. The live stream is discontinued a short time later. The website, however, lives on.
24.10.1997
For the first time there is an Ohrbelag! show available in RealAudio format; once again Ohrbelag! can be heard worldwide.
20.03.2000
The Domain ohrbelag.de gets registered.
07.08.2000
The entire Ohrbelag! website has now moved to the new Provider.
01.08.2008
Due to legal amendments that came into effect in 2008, Ohrbelag! can no longer realize its concept as a non-commercial radio show and therefore ceases broadcasting for the time being.

Our Hall Of Fame